Headlines » Will Smith's Former Dir of Development Patterson Back ...

Will Smith's Former Dir of Development Patterson Back Home in Chicago

When Will Smith asked her if she wanted to help launch his first production company she said, “It depends.” Meet Danita Patterson, a woman who was set in her Midwest values in a LA culture.

For the past 28 years, Patterson has built her career in Hollywood, and is now coming home to Chicago to fully launch her own production studio, Destiny Unlimited. Her first project will be a feature film inspired by her strong multicultural relationships, Midwest values, and advertising agencies like Leo Burnett.

With some herbal tea and a bright smile, Danita Patterson sat down in Questar Entertainment’s office on Michigan Ave. I looked up to see a woman in a Euro Chic black jacket and rhinestone t-shirt with Chicago’s skyline.

“There’s not many people who are vocal about being from Chicago. But I am,” she says, “I would have never left Chicago if I could have done here what I was doing there.”

Born and raised in Chicago, Patterson knew at age 10 she wanted to move to Hollywood to work in entertainment. She started acting and singing at two and at 14 professionally performed in musicals at the Arie Crown Theatre. Patterson’s best friend, Rhonda Jackson-Sams, introduced her to her dad, Don Jackson, CEO of Central City Productions. She quickly began her production career at 16 years old in TV, music specials and award shows and worked her way up from assistant producer to producer.

From Fresh Prince of Bel Air:

“LA is a cornucopia of people from all over the world. You are really with the best of the best...I wanted to be in the heart and soul of mass media,” Patterson describes. Talented Chicagoans were moving to Hollywood for job opportunities and growth on major networks and Patterson, with no connections, reached out to her Northwestern alumni network to make the move.

She took her Chicago production credits, and booked meetings with ten alumni. NU Wildcat Jan McAdams in Business Affairs from Columbia Studios connected Patterson with her industry colleagues, the Head of Production for Fox, Joel Hornstock, the Head of Production for CBS, Dee Baker, and lifetime mentor June Baldwin, Business Affairs for Quincy Jones Entertainment. Through those connections, she had a meeting with Winifred Hervey Stallworth, who was the executive producer of FRESH PRINCE.

Patterson’s strong Midwest work ethic and her drive to make connections, ultimately landed her as a production assistant on THE FRESH PRINCE OF BEL-AIR. Even though it was below her skill level with a paycut, it helped her permanently move from Chicago to Hollywood in 1992 and became one of her fondest memories of production. 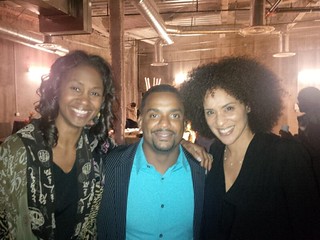 Patterson with Alfonso Ribiero and Karyn Parsons of Fresh Prince of Bel-Air.

While on the set of THE FRESH PRINCE OF BEL-AIR, Patterson had a conversation with Will Smith and two weeks later he asked her if she wanted to work for him.

She said, “it depends.” And Smith laughed.

Patterson took a sip of her herbal tea and shared that she knew three things about herself when she moved to Hollywood, “I had a vision. I knew who I was. I knew I was loved by my parents... Those things anchored me and helped me not to get enamored by stars, by money and all those things that can cause you to go astray.”

Before she took the opportunity, she needed to know if it would fit with her vision. She wanted to be closer to content and the development process.

Patterson gained a strong business background from her mother, Sandra Patterson, who was a hidden figure working as an IT Manager in the 70s and 80s at a Fortune 500 company in the Sears Tower Building. Will Smith needed her business acumen to professionally polish his rising star and to launch his production company, Will Smith Enterprises, now known as Overbrook Entertainment.

After three years of working on NBC’s THE FRESH PRINCE OF BEL-AIR and with Will Smith as director of development and administrative manager on SIX DEGREES OF SEPARATION, and early development stages of BAD BOYS, her career flourished. 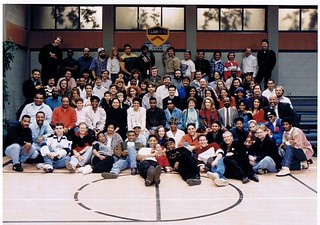 The cast and crew of The Fresh Prince of Bel-Air

Bringing Production from Hollywood to Chicago:

For 20 years, Patterson maintained residences in both Chicago and Los Angeles and always had a desire to bring production and entertainment jobs back to her hometown. When Patterson noticed her friends were coming to Chicago from LA to work on EMPIRE, CHICAGO FIRE and CHICAGO PD, she realized this was the perfect time to join this new frontier.

In the past, Chicago had productions like FERRIS BUELLER'S DAY OFF, which Patterson appeared in, but as a performer and now producer, she noticed a shift from sporadic, one-off movies to a city building an industry that was consistently producing and writing quality content.

She was part of a group of “foot soldiers,” comprised of people from Chicago who left to find careers elsewhere in the industry. Through their input and support, the State of Illinois secured a tax incentive in 2003, which brought momentum to Chicago’s film industry. In 2005, Jennifer Aniston’s THE BREAK-UP was filmed in Chicago and FOX’s TV series PRISON BREAK was filmed here. Long-standing shows like CHICAGO FIRE, EMPIRE and CHICAGO PD have brought us to today, with an even greater tax incentive, and a budding production and creative scene with Cinespace Chicago Film Studios.

There’s now greater opportunity and tax incentives that allows job opportunities and growth for Chicago talent to be in the entertainment industry in their hometown. Today, the Illinois Film Tax Credit includes 30 percent of the qualified Illinois Production Spending.

After working in Hollywood for the majority of the time with stars like Will Smith, Quincy Jones, and Blair Underwood, Patterson was also a part of the 100 million dollar box office success of Sony’s HEAVEN IS FOR REAL, spearheaded by studio executive Devon Franklin. She’s now bringing her talents home to produce a women’s ensemble feature film, HEALING CIRCLE. This feature film follows four multicultural women working at an ad agency facing the crossroads of life.

Chicago has a spot in this marketplace, and in this story. Patterson originally wrote the script in 2006 and recently revised it to paint a narrative of “sophisticated, sexy, and stable” professional women today.

“I want a movie that shows everyday professional women doing real life,” Patterson shared. “We’re not the SEX AND THE CITY women,” Patterson described the characters, “We’re the women who are picking our kids up for soccer after we finish - chop, chop - doing deals. We’re loving our men. Our men are loving us. We’re having challenges here or there.”

HEALING CIRCLE is in its final stages of development and will begin production in 2020. It will be filmed in Chicago’s neighborhoods and downtown where, hopefully, she’ll shoot in the actual Leo Burnett building.

Amanda Elliott covers the TV and Film scene for Screen Magazine. She works alongside independent filmmakers as the Marketing Manager for Questar Entertainment, a film and TV production and distribution company, and its subsidiaries, GoTraveler and Cow Lamp Films.